"Does the swamp begin here?"

"Yes," said the lockman, leaning at an angle of forty degrees, and slowly pushing the great beam with his back. "It begins here, and it runs all the way to Florida."

Connectivity
MORE
West Mims
Accumulation
Drainage
Among the greatest threats of the proposed TPM mine are those to the Okefenokee. Mining would involve digging pits and withdrawing groundwater adjacent to the swamp, which could alter its hydrology and habitats. TPM and their consultants TTL Associates propose that there is a topographically-induced groundwater divide that persists through the full thickness of the surficial aquifer. Yet, the USGS concluded—in 1989—that there is easterly water movement from the swamp, through the ridge, toward coastal lowlands. (49) A groundwater hydrologist from the U.S. Fish and Wildlife Service who reviewed the TPM application drew the following conclusion about a connection between the swamp and surficial aquifer:

Okefenokee Swamp (a National Wildlife Refuge) should be presumed to be in intimate hydraulic connection with the surficial aquifer underlying Trail Ridge and wetlands south and east of the swamp, the swamp’s water surface (the southeast portion of the swamp) being an extension of the local water table. Areas in intimate hydraulic connection with this portion of the swamp include locations west of and within the 2020 (and 2019) proposed TPM Minerals permit and mining areas, and more so portions of the 12,000 acre study (exploration) area east of the swamp itself. (50) 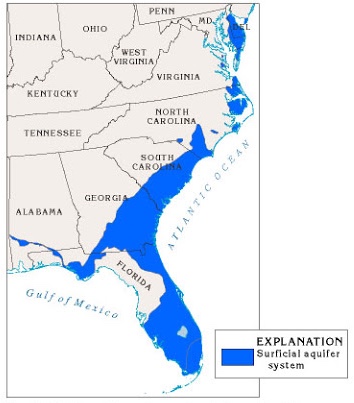 Relatedly, in October 2020, the USACE reevaluated the revised TPM application and declared no need for federal review because there the project posed no impact to “waters of the United States” per the Navigable Waters Protection Rule, also known as the Dirty Water Rule. In June 2020, it stripped so-called isolated non-floodplain wetlands and intermittent and ephemeral streams from protection under the Clean Water Act of 1972 (CWA), the primary piece of federal legislation regulating water pollution. (51) The Obama administration-era 2015 Clean Water Rule had set out to clarify long-standing disputes over jurisdictional waters but was met with fierce opposition by real estate, agriculture, and industry groups. The Trump administration-era Dirty Water Rule overrides some of the decisions made in 2015.

Waters of the United States are underestimated by remotely sensed data, adding to the complication caused by the many politically-driven interpretations of the CWA. The USGS National Hydrography Dataset (NHD) was created from digitized surface water information from aerial photography and paper maps and lacks the kind of granularity that can now be achieved using light detection and ranging (Lidar). (52) The Trump administration has used this to their advantage, claiming, “Assertions have been made that the new [Dirty Water] rule will reduce jurisdiction over thousands of stream miles and millions of acres of wetlands. These assertions are incorrect because they are based on data that is too inaccurate and speculative to be meaningful for regulatory purposes.” (53) 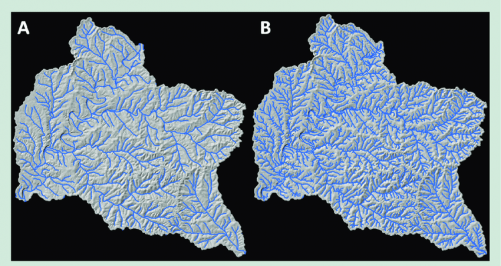 Comparison of (A) the NHD stream network and (B) a lidar-derived network for the same portion of the Mark Twain National forest, showing the increased density of the stream network derived from lidar.
Source: Robert Gubernick, United States Department of Agriculture.

Among the country’s (and the world’s) wetlands are peatlands. Even as peatlands sink nearly a third of the world’s soil carbon, they are normally excluded from Earth System Models that depict the climate by simulating biogeochemical interactions across the atmosphere, ocean, land, ice, and biosphere. Their exclusion is attributed to a lack of reliable maps of their extent and distribution—another resolution problem—, resulting in the omission of peatlands from models of critical and international importance. Indeed, peatlands are spatially heterogeneous and it is difficult to capture such heterogeneity on the scale that models operate on.

These resolution problems are important for the proposed TPM mine and future of the Okefenokee because lowered water levels can, beyond drying the peat and posing greater risk of severe fire (thus contributing to climate change globally), intensify methylmercury (MeHg) levels locally; in addition to going up in smoke, metals can also be chemically transformed by changes to water levels, making peat a site of transformation. As aforementioned, mercury is present in high levels in the Okefenokee, and it becomes a bioaccumulative neurotoxin as methylmercury, which is lipid-soluble. One study from the Okefenokee that looks at mercury concentrations in invertebrates names fluctuation in water level as a driver of methylmercury production, (54) which is consistent with other studies from peatlands that find hydrodynamics key to mercury release and retention (55) and relates to the question of connectivity between the swamp and aquifer:

Lowering of water levels within the swamp can alter the chemistry of the swamp by introducing oxygen into swamp sediments. Increasing pE results in the biological conversion of reduced forms of sulfur to sulfuric acid, causing a substantial reduction in pH, which is what has been observed. A change in pE and pH can also result in the formation of soluble forms of heavy metals, including lead and mercury, which has also been noted. Thus, many of the environmental problems associated with the Okefenokee Swamp can be attributed to aquifer dewatering if a hydraulic connection can be established between the swamp and the underlying aquifer. (56)

The page “Myths v Facts” on TPM’s website reads: “The surficial aquifer will be temporarily impacted in the immediate vicinity of the mine excavation. Once the area is backfilled, the groundwater level will return to its previous level.” (57) Even with a temporary impact, assuming a hydrologic connection between the swamp and aquifer, the change in wetness would likely impact methylmercury production in the swamp. Climate change is already expected to impact peatland hydrology and plant communities—and therefore fire frequency and severity as well as methylmercury production—without the additional stress that could come from drainage. The potential damage from groundwater withdrawal, not to mention the other forms of disruption HMS mining causes, is not worth white pigment.

Demonstrating hydrologic connectivity, between the swamp and aquifer and between waters of the United States, is at the crux of the TPM application, highlighting friction between seeing ecosystems in gradients of connectivity versus a binary of connected and not connected. Even with the use of Lidar and ground-truthing (verifying with on-the-ground observation), the binary of connected and not connected—itself dependent on the binaries of above and below, wet and dry— remains politically operative and exclusionary of non-Western ontologies and epistemologies. Under racial capitalism, fish and trees and people whose lives and livelihoods are not as valuable as extracted commodities are collateral damage.