This analysis uses the Normalized Burn Ratio (NBR)—an index designed to highlight burned areas and fire severity—to compare the pre-fire period between March and April 2017 and post-fire period April and May 2017 for the West Mims Fire.
Source: Author, using Sentinel-2 and Landsat 8 images.
While somewhat unintuitive, many wetlands and species are in fact acclimated to periodic, low-severity fire. Research suggests low-severity fires can even support long-term carbon storage by changing the chemistry of the carbon in the soil organic matter into a more stable form, restricting microbial decomposition. (4) People indigenous to the region have spent thousands of years working with fire. It is the increased frequency and severity of flameless but flammable smoldering peat fires that can cause public health and climate policy problems.

Some of the largest and longest-running fires on Earth, notoriously difficult to identify and extinguish, smoldering fires burn fuels like coal and peat, engendering health crises by releasing more fine particulate matter than other wildfires (5) and mobilizing carbon that has long been an inactive part of the carbon cycle, accounting for up to 15% of annual global greenhouse gas emissions. (6) Burning deep and laterally, they can change soil elevation and thus how water moves thereafter. Large fires of this sort occurred every 50+ years during the past century. (7) Newer models adopt a return interval of five to ten years. (8) 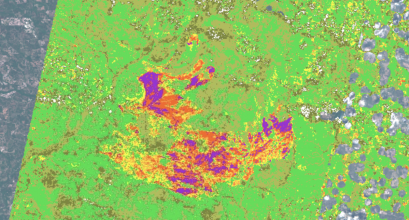 HERE for more on peat fires and reading the continuity of the peat archive
Peat is wet but condenses as it dries, turning into one of the most flammable substances in nature. As such, peatlands exist in a continuum of wetness and hotness, a space of constant shifting. A peat fire is born from a surface fire, often instigated by lightning. When the energy produced by fire is higher than the energy needed to dry the underneath of peat, then it becomes smoldering. The fire burns laterally and horizontally, carving a depression into the land and turning the peat to smoke and black carbon. Smoke from peat fires surrounds bodies enmeshed in the world that "crosses through them, transforms them, and is transformed by them," which environmental humanities and material feminism scholar Stacey Alaimo encapsulates with the notion of transcorporeality. (a) In this vein, Rob Nixon, perhaps best known for coining "slow violence"—meaning a gradual and less conspicuous violence with no less disastrous effects—contends that the past is never fully past. (b) The matter in natural archives does not stay submerged, and instead traverses bodies, which are forever in becoming.

Reading the continuity of the peat archive as it goes up in smoke is a kind of reading atmosphere. Thinking with atmospheres is a growing practice of attending to questions of how matter becomes airborne and settles many times over, warming the planet, traversing and toxifying bodies as "channels, containers, and filters for airs and the things they hold." (c) Scholars Timothy Choy and Jerry Zee offer "suspension" as a "becoming-atmospheric," writing, "To ask after subjects of suspension is to ask what beings are in becoming in thickening atmospheres." (d)

Temporalities collapse in the peat fire: the formation of the peat deposit, European settlement, the sale of leaded gasoline and burning of coal, chattel slavery, the mobilization of carbon-heavy metals in the particulates of smoke, the growth of a tree from seed, the onset of respiratory symptoms. Along with molecules and metals, peat archives the racialization and conversion of peatlands into legibility to the colonial state. When things spill over, this relation does, too. Linear narratives of "fixing, making-up for, and even sustaining" can mask the persistence and reassembly of forces and existents that are the fallout of slavery and colonialism, can mask "that all actions are forever contracted in lines-of-flight whose effects will continue to be made and unmade in many futures to come." (e)
MORE
MORE
West Mims
Accumulation
Drainage
Extraction
Connectivity
Refugia
2022 • About | Notes